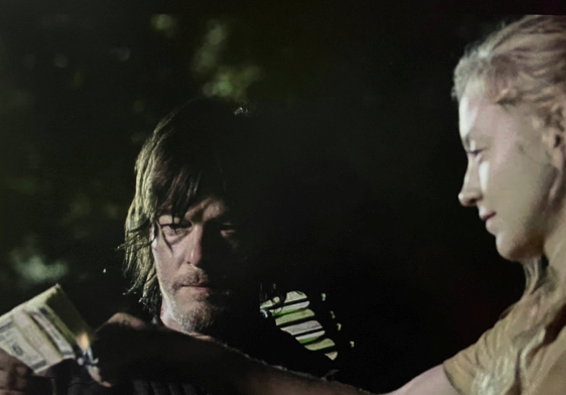 American post-apocalyptic horror series The Walking Dead (2010-2022) has been accused of both killing off out queer characters and explicitly explores a world that recreates fascist masculinity (Gencarella, 2016) and heteropatriarchal gender roles (Sugg, 2015). However, the fan favorite Daryl Dixon (Norman Reedus) presents an opportunity for queer spatiality which disrupts the dichotomy of queer/heterosexual. Dixon follows a queer narrative trajectory, largely outside of heterosexual relationships and estranged from his family of origin. The show’s treatment of the character reflects queer masculinities which develop outside of heteropatriarchy, based in a queer process of becoming, frequently seen among AFAB butch lesbians, non-binary, and transmasculine folx. Through his proximity to out queer characters on screen and role as the protector of the group, Daryl is spatially oriented (Bradbury-Rance, 2019;Ahmed, 2006) both within the group and his own body in varying degrees of distancing.

Dixon’s role outside of a dominant gendered framework as well as his tendency to distrust models of collectivist structures which replicate American capitalist society give primacy to a queer anti-establishment positionality. The privacy to which Dixon’s sex life has been shielded from view highlights the ways queer readings have influenced the show and present Dixon with queerer affect. For example, the fandom around Dixon representing an asexual or gay character caused the writers to avoid showing Daryl kiss character Leah on screen in season 10 (Stone, 2021), instead foregrounding looks and close up shots by a fireplace which are typically reserved for reading lesbian desire on screen (Bradbury-Rance, 2019).