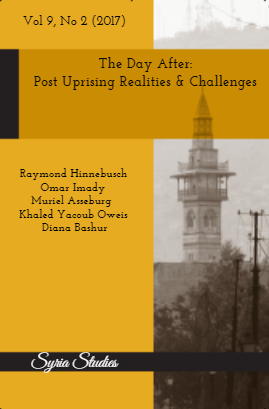 In Syria’s Reconciliation Agreements, Raymond Hinnebusch and Omar Imady explore how the regime and the opposition interacted with the evolving idea of musalahat or ‘reconciliations’. At first, when neither side could unseat the other, these reconciliations were in essence, truces which reflected the war of attrition. As the regime grew stronger, largely after the Russian intervention, the musalahat evolved into several more advanced types, all designed to break the rebels, yet significantly different in the extent to which the regime was willing to agree to a more balanced arrangement. Hinnebusch and Imady proceed to examine the more recent, and internationally sanctioned, ‘deconfliction zones’ and show how they are similar, and different, from previous arrangements. The critical trademark of all of this, from a governance perspective, is the fact that all these arrangements entail, in various degrees, the decentralisation of government authority. The paper ends with the ironic conclusion that the Syria that may emerge from all this extensive decentralisation may resemble in certain ways the very Syria the protesters back in 2011 were advocating.